The club is incredibly lucky to have two of the best coaches from the world of fencing. Linda and Pierre have represented the UK at both Olympic and Commonwealth level and now bring their expertise to club members, enabling everyone to reach their full potential. Its not all about competing though and if you are a social fencer then you will still get plenty of tips and advice. 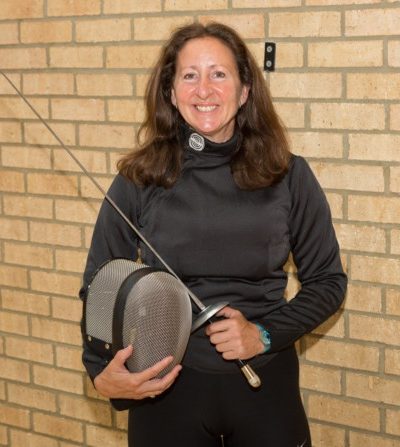 Linda was chosen to be a Torchbearer in the run up to the 2012 Olympic Games, was given an “Inspiring People’s Award” by the Mayor of Newham (Sir Robin Wales) in 2013, and was awarded the British Empire Award for services to sport in the community in 2015.

Linda is passionate about developing the talent of young fencers and has coached a number of junior champions.

Linda focuses in the 1985 world student games in Japan, ahead of the last 8

Linda wins Gold for England at the 2002 Commonwealth games

Pierre represented GB at the 1980, 1984 and 1988 Olympic Games, won six National Senior titles and six Commonwealth Games gold medals (over three consecutive Commonwealth Games) during his competitive career, which has never been equalled, making him the most successful male British fencer of the 80s.

His coaching career (spanning 32 years) has been equally successful, having taken a total of thirty young people from grass roots to GB international level.

These young fencers have gone on to win titles at national Cadet, Junior, U23 and Senior level, at Junior and Senior Commonwealth Games, and at Cadet and Junior European and World Championships.

Pierre is now Head Coach of Newham Swords Fencing Club, and the coach to the reigning National Senior Women’s Foil Champion, Teagan Williams-Stewart (who won the title at just 16 years of age)!

In 2016, Pierre was awarded the BF Silver Award for his outstanding work in coaching and contribution to fencing generally’

As well as our head coaches we also have a team of supporting and visiting coaches, as well as session assistants to help the sessions run smoothly and provide extra support.

Running the fencing sessions is very labour intensive and relies on the input of a dedicated team of volunteers. If you have a spare hour to help out at on a Saturday then please get in touch.

We would love to hear from you!

Need to know something? Just send us a message…..

get in touch
© 2022 Saffron Walden Swords. Created for free using WordPress and Colibri